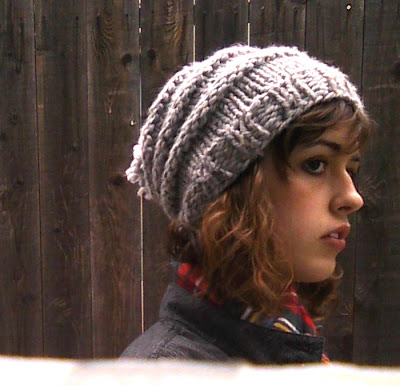 A simple, cute, extremely warm hat for winter weather, which will only take a couple of hours to knit!

There is an optional short row shaping that can be applied to whatever hat you want that has a ribbing band,  and the thick yarn and simple pattern make learning this technique with this hat simple and easy.  Many hats that have wide ribbing that looks cute in front, but in the back it stands up and I don't like the way it looks.  The short row shaping helps eliminate it by making the back narrower than the front.  You can easily skip this step.

There is also a little trick at the top of the ribbing to help get rid of that funky thing that the purled stitches do, how they seem to widen out on the top.  The bulky yarn would have made this even more noticeable.

One 10.5 circular needle, or size to obtain gauge

One set four dpns, a smaller size than the circular (I happened to have US 8 and nothing larger, which worked out fine, but pretty much any size between 8 and the size you use would be okay)

(This is the short row shaping, you can skip it and work 2 rounds instead) Work in patt to 7 sts before marker.  The last stitch you worked was a knit, and the next one is a knit, right in the middle of the knit rib.  Move the strand of yarn to the front, and then slip the next knit stitch purlwise.  Put yarn in back.  Slip the same stitch back to the other needle.  Now the yarn is wrapped around the stitch that you slipped.  Turn work.

purl one stitch, k2 , p2 around to 9 stitches before marker.  Do the short row shaping again, but this time it's with purl stitches, so instead of bringing the yarn in front, you put it from the front to the back, then do the slip, wrap, slip, and then turn.

Now is the little trick to keep your purl ribs from being too wide on the top.  The next rib is knit: k1, then pick up one stitch from yarn between the stitch you just knit and the next one, and knit into the back of the loop you just picked up (this is m1).  K1.  So you just did the rib, and put an extra stitch in between the two regular ones.  Now is the purl rib: p2t.  You should have 4 sts from marker.

This section is knit on the dpns.  If your needles are the same size as or only one size smaller than your circular needle, than skip these two rounds.  If they are two or three sizes smaller, then k 1 round, with the needles, which puts all of the stitches onto the dpns.  K 1 round.

Basically, changing to a smaller needle counts as a decrease round.  If the needles are not significantly smaller, you don't need to knit the two rounds.

Repeat these 2 rounds till there is only 6 stitches.  Pull yarn through loops with crochet hook, and tie off.

There is one last step besides weaving in the ends that you don't have to do, but it makes the top of the hat sit closer to the back of your neck, instead of up on your head.  take a 6" or so piece of yarn and tie to the inside of the hat right between the ribbing and the first knit section, in the back where the rounds start, and pull through so that the yarn is sticking out to the front.  now, weave in and out at each section, so that every knit section has the yarn on the outside and every purl section has the yarn on the inside.  When you reach the top knit crown section, bring out as usual, but bring back in only one or two rows away, so that the yarn on top is only like a half an inch.  Turn inside out, pull the yarn tight, and tie end to one of the ends used to tie the pompom on. 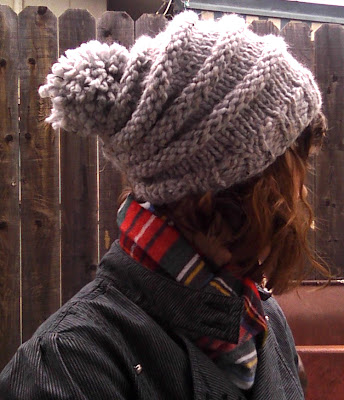 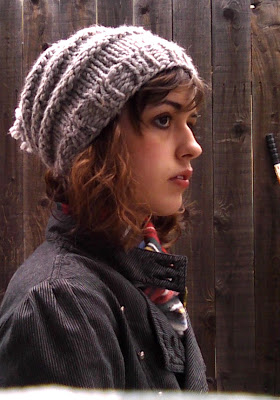 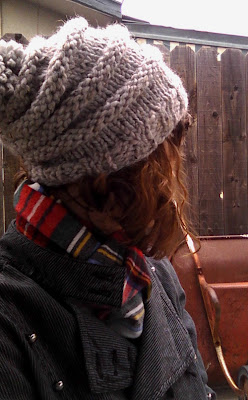